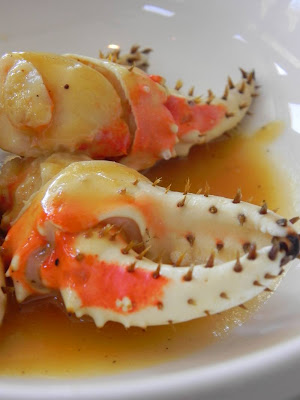 So when I told friends that I was going to cheat at Lilette last week, they all responded with a resounding "Finally!" or variations thereof. Apparently, John and I were the only people who have not yet visited the cozy, Magazine Street restaurant created by Chef John Harris. It was my 88th cheat and I lost one of the pounds I gained the week previous, putting me at a total loss of 80 pounds.

I made reservations earlier that day in the hopes of procuring a window seat, desiring only to capture perfectly-lit images of Lilette's cuisine for my readers. When we arrived though, they plopped us at a two-top in the center of the sparsely-decorated dining room and I assumed it was to save the booth near the window for a larger party. Unfortunately, I assumed wrong because the table remained empty while we dined until it was later taken by another couple. Perhaps if I wear a pin-striped suit next time?

We had an unusually long wait before ordering, so we talked about the decor of the dining room which featured dark red, almost chocolate colored walls, an off-white painted tin ceiling and classic black & white tiled floors. There is no art on the dark walls in Lilette, but there were several old mirrors hung by long wires and an interesting shelving system on the wall behind the bar. 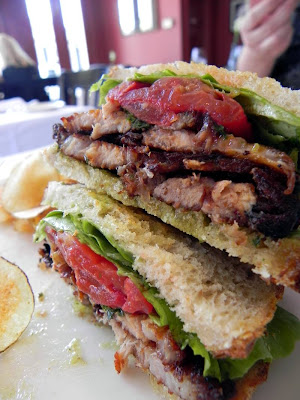 At long last, we were able to order a couple of cocktails, which were fabulous. Sipping on a Cucumber Martini (John got the Amaro Iced Tea) kept me calm while we waited for another stretch before our server took our lunch order. It seems he was busy keeping an eye on a large group of women who were celebrating a birthday (as well as frequent, animated conversations with the bartender), but seeing as it was his only other table, I had a hard time cutting him some slack. Though, when the food arrived, our attention on the service was easily diverted.

The appetizer we chose, easily the star of the entire meal, was Alaskan King Crab Claws served with passion fruit butter. Let me tell you, not only did John and I pull every sliver of crab out of the shells, we also ordered extra, crusty rolls to sop up that fantastic sauce. The tart, brown butter flavor of the sauce was stunning with the sweet, juicy crab meat...a definite treat.

It was super-hot that day, as it has been everyday since, and I was in the mood for something lighter for lunch. So, uncharacteristically, I chose the Chicken Salad for my entree. It was cool yet rich with port-plumped figs, baby greens and a smattering of pine nuts and I used the grilled wheat bread on the side to scoop the delicious salad into my mouth. 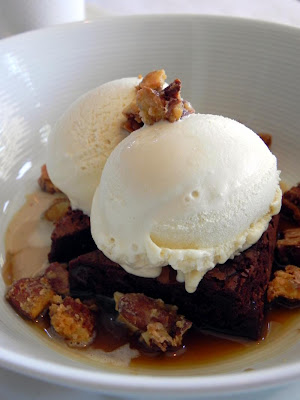 John picked Lilette's version of a BLT made with crispy hunks of pork belly, fresh tomatoes that had been blanched and peeled and baby greens served on herbed aioli-slathered and toasted sourdough. He easily gobbled the sandwich (of which I managed one small bite) and the accompanying house made potato chips.

As you well know, I couldn't leave without dessert and I chose the Brownie Sundae. It came out of the kitchen in a huge bowl and was served with gargantuan spoons, but I could have easily just stuck my face in like a pig to the trough. The ooey-gooey, fudge-a-licious brownies were topped with two huge scoops of vanilla malt ice cream "floating" on a small pool of espresso and bourbon-butterscotch sauces and sprinkled with malted almonds. We were moaning with delight to the very last bite 'till the other diners in the restaurant were giving us dirty looks...though I think they were just jealous.
Written by Unknown
Email ThisBlogThis!Share to TwitterShare to FacebookShare to Pinterest

LOL! I can only fit so many pics into a post and it was either my salad or dessert and to me, dessert has priority! ;)

I will agree with you on that however I would not have been able to pass on any of it. Sounds and looks absolutely great. The BLT just seems so large and a good amount of food from the picture.

Love Lilette! Went there for lunch a few years ago and been dreaming about going back ever since. Glad to hear that pork belly BLT with chips is as good as ever. I was impressed with the service and the wine the day we went.