Why my friends are cooler than yours...

Back in November of last year, my friend Casey (being the football fan that she is) entered a contest for tickets to the Tostitos BCS Fiesta Bowl game and won. She and her boyfriend Brandon got an all-expense paid trip to Glendale, Arizona and watched as the Auburn Tigers beat the Oregon Ducks 22-19. Now if that wasn't cool enough, Casey was also entered for a chance to win a Ford F-150 Ultimate Tailgate Edition Truck and...she won!

Though the contest was held way back in early January, Casey and Brandon just received the truck this past Friday. So, without further ado and just in time to celebrate the approaching rapture, Casey and Brandon came and picked us up for an impromptu picnic in City Park. 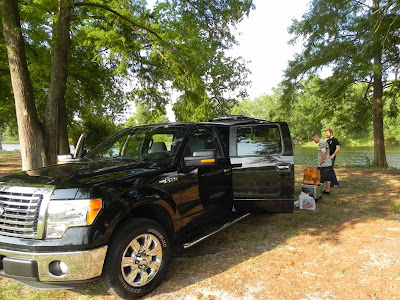 We stopped over at Rouses for some quick supplies and then found a cool spot in City Park near "da bayou" and BA-BANG! Instant BBQ... 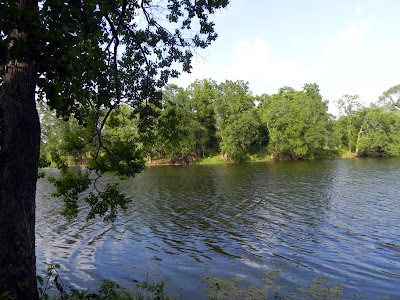 The cab of the truck is huge, with lots of space in both the front and back, but get this - all the REALLY cool stuff is in the bed. 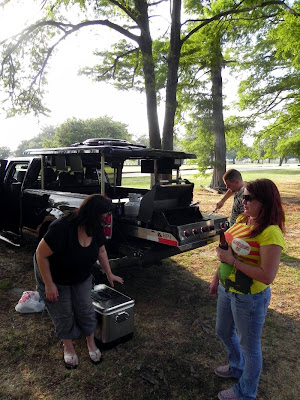 A satellite-topped cover over the bed of the truck slowly rises up and the tailgate flips down to reveal a stainless steel, propane BBQ (with a side burner) that slides out of the back. There is also a sink and a large ice chest screaming the Ford logo... 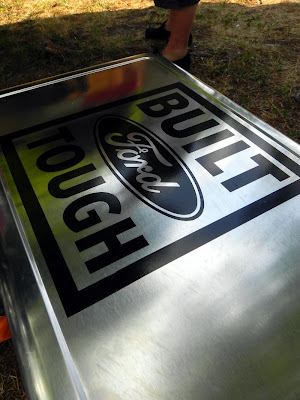 So, we listened to the Soul Rebels Brass Band through Pandora Radio that was hooked up from their Droid Smartphone, ate freshly grilled, Chicken-Jalapeno sausage and drank LA-31 Genade from Bayou Teche Brewing within mere minutes of backing into our spot. 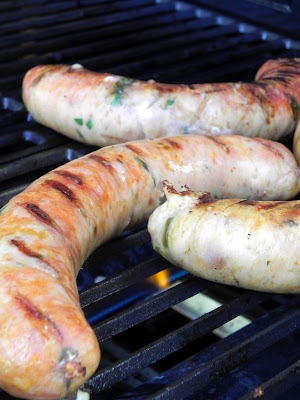 Then, when the day started to wane and night began to fall, we flipped down the TVs and played Dead Rising from the Xbox 360 that was hooked up in back. 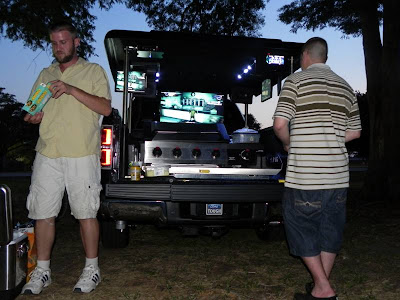 Does it get any better than this? I have visions of outdoor Treme BBQs, DDR parties at the Fly and, hey - they could even tailgate! Jealous much?

Well, now my cool friends can be your cool friends, too! Casey and Brandon are planning on sharing the love by offering to rent out this insta-party on wheels. If you're interested or just want to know more, email Casey at csmithnola@gmail.com.
Written by Unknown
Email ThisBlogThis!Share to TwitterShare to FacebookShare to Pinterest

Wow that girl has some seriously good luck! That truck is awesome.