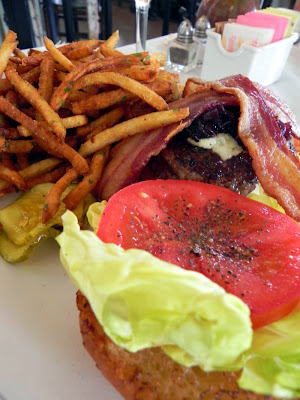 Last week, John's 27th birthday dawned on Thursday, April 14th. I had hesitantly asked him where he would like to dine for our cheat, my treat of course, preparing myself for the words "Taco Bell" to erupt from his lips, but he surprised me. A large, questioning smile spread across his face as he turned to me and asked, "Can we go back to Patois?"

Momentarily stunned, all I could think to say was "Uh, yeah!"

Both of us had become enamored of the excellent cuisine that could be had at this reasonably priced, comfortable, neighborhood establishment and found any reason we could think of to return. John's birthday just happened to be the perfect excuse. It was my 81st cheat and I am down a grand total loss of 78 pounds, having lost one I had gained last week.

Though John's birthday was on Thursday, we had to wait till Friday to dine at Patois for lunch. We arrived fairly early in the lunch hour and were not surprised to see the restaurant on the corner of Webster and Laurel Streets already bustling. We giggled a bit when we were steered to the exact table we occupied on our last visit and made promises to each other that from now on, we would actually request this little two-top near the small, iron-railed staircase when we inevitably dined at Patios again in the future. 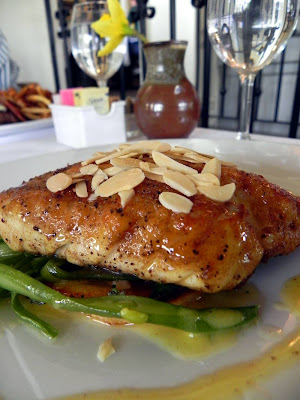 Our server filled our wine glasses with ice cold water while we looked over the menu and decided, rather quickly, what we wanted for lunch. We were brought the same, delicious buttery rolls that were still quite warm and again, we waited till our appetizer arrived before eating them. This time, we chose the Moules Frites or steamed mussels and French fries, as we both distinctly remembered drooling over this dish when it arrived at a neighboring table.

The mussels tasted just as good as they looked, perhaps even better, steamed in a rich, garlicky Creole tomato broth that we sopped up with our rolls. We also stealthily scooped out every last, sauce-laden French fry from the bottom of the bowl and considered slurping it up like soup before our entrees arrived.

Though it was one of the most expensive dishes on the menu, I couldn't resist ordering the Almond Crusted Gulf Fish. The thick, white fish fillet arrived in all it's golden-fried glory atop potato galettes and buttered green beans surrounded by the most fabulous tasting lemony, buttery meuniere sauce that the waitress caught me sucking off of my fingertip. 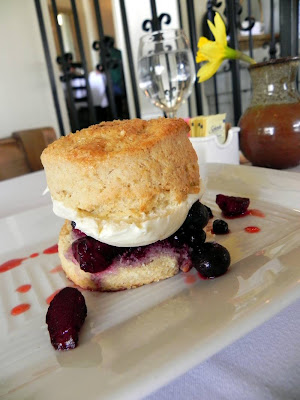 John ordered the Patois Burger dressed with thick slices of smoky bacon, creamy bleu cheese and red onion marmalade. Though it was an excellent hamburger (you know I had a bite), John could only finish half of it, so we boxed the rest to take home. I had no such difficulty with my fish...

Even though John was stuffed, I couldn't leave without ordering dessert. I tried to choose something on the lighter side in order to induce my satiated boyfriend to try a few bites. I opted for the Berry Shortcake that turned out to be what tasted and felt like a split, sugar-topped scone filled with mascarpone cheese and assorted berries that had been steeped in a blood orange reduction. It was fantastic! Although I couldn't finish all of the cake, I scraped off all the berries and cheese while we waited for the check.

Though I thoroughly enjoyed my meal, this particular outing was all about John and I was thrilled to see that he was just as pleased as I was. Happy Birthday, my love!
Written by Unknown
Email ThisBlogThis!Share to TwitterShare to FacebookShare to Pinterest

This looks fantastic. Been wanting to try Patois for some time. I'm a sucker for a little French bistro. I also want to try Coquette.