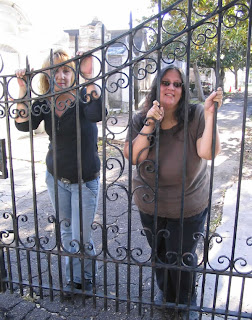 Several years ago, John's mom Glenda drove down from Ponchatoula to visit with us for the day. Although she had lived almost her whole life only an hour's drive away, she never really had the opportunity to explore New Orleans and John and I thought we might take her somewhere we thought was really cool, Lafayette Cemetery #1 in the heart of the Garden District.

By the time we reached the cemetery, it was almost 3:00 p.m. and the cemetery closes on Saturdays at 2:30.   We parked on Prytania Street and walked around to the entrance to see if it was still open.  There were several large groups of people wandering around the tombs and we assumed they were tour groups. We thought we'd have plenty of time to wander around and snap some good pictures before the groups were finished.
We plunged into the old graveyard, taking pictures of incredibly old mausoleums enjoying what was left of a beautiful day surrounded by history and wrapped in blissful quiet. I marveled how amazing it was that New Orleanians lived so close to theses cities of the dead.  Also, it was hard to believe that what seemed like a very large cemetery was enclosed in only one city block.  We couldn't even hear the traffic from Prytania and Washington while inside and after a bit, the quiet became almost eerie even though the sun was still well above the horizon. 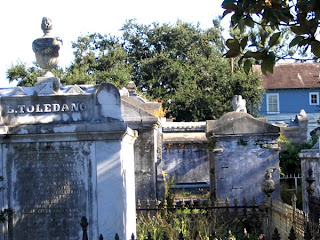 It became so tranquil that I started to get nervous.  I asked John and Glenda if they could hear voices and we all stopped to listen, hearing nothing but the twittering of birds and the sounds of stray breezes rustling the fallen leaves strewn across the pathways of the cemetery.  In a mild panic, I rushed back out towards the main gate to see if it was still open.
It wasn't.
I was locked in the Lafayette Cemetery with my boyfriend and his mother and the sun was getting ever closer to the horizon making the shadows grow long. Dark corners got a whole lot darker and small cracks in the tombs appeared much more ominous.  Our jokes about demons and ghosts emerging from those cracks quickly became fears as the daylight faded. 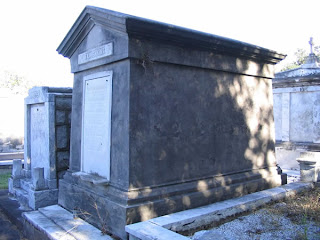 John, being 6'3", was able to climb over the tall, wrought iron fence with no difficulty and he wandered around the neighborhood to see if there was anyone who could help me get out.  Glenda could have easily climbed the fence too, but being the sweetheart she is, she decided to stay inside with me, refusing to leave me trapped inside by myself.  I can't tell you the number of folks who walked by just to laugh at our predicament...I felt like some kind of sideshow.
There was a telephone number near the main gate for the grounds keeper and I called with my fingers crossed, hoping he might pick up.  Instead, I got connected to a security service who informed me that unless I could get out of there on my own, I was stuck until the grounds keeper returned on Monday morning because he was the only one with a key to the gate. Let me tell you right now, there is no way in hell I was spending the night inside a cemetery. 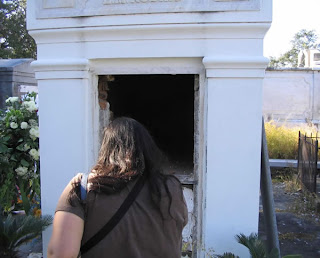 I tried climbing over the fence, but was not strong enough nor tall enough to hoist myself over (or even between) the wrought iron points at the top.  Then, with the aid of nearby tombs, I managed to climb the ten foot wall surrounding the cemetery, thinking that John could help me down the other side. But once I was perched on top of the wall, I froze!  I got so frightened when I looked down at the drop to the sidewalk on the other side, I almost peed my pants.  Slowly but surely, John's mom coaxed me back down from the wall with my knees and palms scraped up from the rough stone, but I was still trapped inside.
The sun had dipped below the horizon at last and I was on the verge of tears contemplating what it would be like spending the night inside a cemetery.  I could just envision it, I'd be huddled close to the fence, jumping at every stray noise...by dawn my eyes would be bloodshot saucers, my skin would be permanently blanched and every muscle in my body would be stiff and tense.  Neighbors would report a fat zombie staring out from the gate and I'd likely be shot in the head just to be sure I wouldn't run amok, feasting on the brains of diners breakfasting at Commander's Palace. 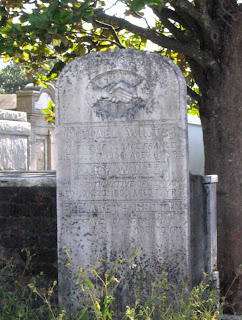 Tears were building behind my eyes while I planned my speech for John and his mother Glenda.  I was going to tell them to leave me there, to save themselves from my nightmare when a concerned neighbor happened to pass by.
"This happens all the time," he said while passing a tall ladder between the bars of the gate. In the end, I was able to climb up the ladder on one side and climb back down on the other side of the fence using the rear of a Garden District Security van.  Everyone was relieved and laughing by the time we were all on the outside, but inside I was still shivering from our near escape.
I have told many people this story and they all think it's just hilarious, a typical "Kim maneuver."  As a matter of fact, an old co-worker and friend still teases me about it to this day.  I have to admit, when I look back, I can't help giggling at the situations I manage to get myself into either, but there is a valuable moral here:
Never enter a New Orleans cemetery after closing time...unless you know you can climb back out!
Written by Unknown
Email ThisBlogThis!Share to TwitterShare to FacebookShare to Pinterest

some people should leave the grave robbing to creeps like me...... creepy Miss Kim!!!!!