Dipping into The Lucky Ladle 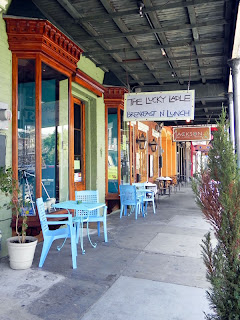 My mother is, without a doubt, a shopaholic. As a teenager, I barely endured long, draining Saturdays spent at Hillsdale Mall, dreary only because my mother and I are complete opposites.  Fluorescent lights leeched life from my limbs as I shuffled reluctantly from Lane Bryant to Nordstrom's and if Beelzebub whispered in my mother's ear...Macy's would be added to the tortuous tour. There was one highlight, one bastion of warmth and comfort to be found at the end of the dry marble halls and endlessly irritating crowds, Stone Soup.

Like salve on a wound, the soup worked wonders for my sanity and allowed me to carry on through days I didn't think would ever end.  A big bowl of clam chowder or potato soup, occasionally accompanied by half a ham sandwich or a hunk of sourdough bread enabled a small taste of hearth and home, to which I desperately sought to return. 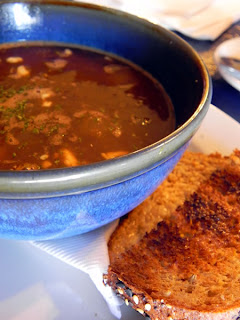 With high hopes for a good bowl of soup my friends and I decided to visit a newly opened restaurant, The Lucky Ladle at 1906 Magazine Street in what was formerly the location for J'anita's.  It was my 45th cheat and I am down 63 pounds.

We strolled into the freshly painted restaurant a little after noon to find only one table filled and an overzealous server.  Although she seemed new to the game, she was very polite, quickly showing us a table and taking our drink order.  Dani and I both selected coffee and were surprised to receive large ceramic, bowl-like mugs that had me bouncing around the rest of the day.

While browsing the menu, I noticed a nice selection of simple sandwiches and breakfast items, but I was a little disappointed by only four soups to choose from.  I suppose that four is two more soups than in your average restaurant, but this is the Lucky Ladle, right?  Additionally, the list of soups was at the bottom of the menu when in my mind, they should be the feature.  Perhaps they could offer four regular soups and two rotating special soups?  Just a suggestion... 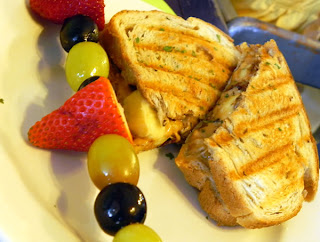 We placed our order and watched Dani's six-month-old daughter Posie while she tried not to be cute and failed miserably.  After 15 minutes or so, all of our dishes came out in a flurry and I had to fight to take pictures before everyone starting eating.  Dani chose the "Elvis" panini, a pressed peanut butter, banana and bacon sandwich on sourdough with a fruit kebab side featuring orange quarters, red and green grapes and fresh strawberries.  My bite proved to have flavor fit for a king with crisp chunks of bacon and a perfect ratio of bananas to creamy peanut butter. And I couldn't help grinning as I watched Posie love her first taste of orange...it definitely won't be her last. 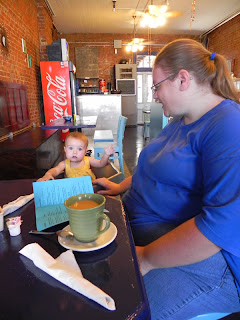 I averted my attention to John's West Coast Turkey Wrap loaded with turkey, bacon, swiss cheese, avocado, fresh spinach and honey mustard.  He chose a spinach salad on the side plus a bowl of French Onion soup.  The wrap was fresh and tasty, extremely simple but good nonetheless and the soup was tangy and rich, loaded with translucent onions and little blobs of parmesean cheese.

My sandwich was called the "Frenchie", grilled ham and swiss on a croissant topped with bechamel sauce.  Again a very simple, but good sandwich that I thought went well with a bowl of their broccoli and cheese soup.  A thick slice of multigrain bread served alongside proved to be an excellent dipping tool, lifting long strings of cheddar with every dunk. 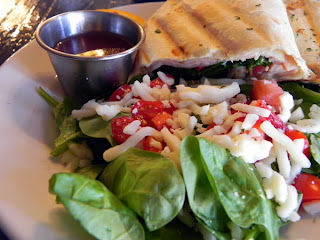 Although it didn't quite bring back the nostalgia I had hoped for (they need more soups!), I found the food to be elementary, something I could have easily made at home, but very fresh and good regardless. If I worked nearby, it would be a great spot for a nice, inexpensive, yet wholesome lunch.  They only opened in June and I am sure there are some kinks that need ironing, so you can bet I'll be keeping an eye out for an expanded soup menu, one that I believe could really make them lucky.
Written by Unknown
Email ThisBlogThis!Share to TwitterShare to FacebookShare to Pinterest