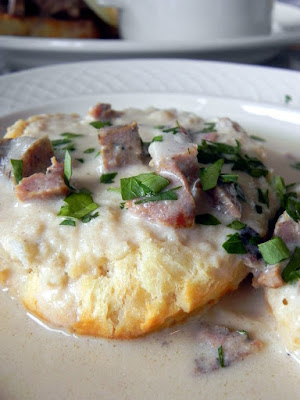 While I don't often journey into Metairie, when I heard (quite a few months ago) that Chef Brad McGehee had opened up his own breakfast spot after leaving Ye Olde College Inn, I simply had to go check it out. Though it is tough to convince John to leave the house on Saturday mornings, I managed to drag him out for breakfast at the Blue Line Sandwich Co. on Metairie Road.

When we walked in, there was a lull at the counter so we were able to order quickly, get our giant mugs of French Truck Coffee and grab a table before the rush. While we waited for our food to arrive, we watched traffic roll by outside the window and commented to each other on the sparse, but appropriate blue decor.

By the time we were almost finished with our first cuppa Joe, our food came flying out of the kitchen all in a rush. We decided to share a plate of biscuits and gravy, and while the biscuits were buttery and fluffy, the gravy was a lot thinner in consistency then I had hoped, even though the flavors were all present and accounted for. A minor glitch, perhaps? 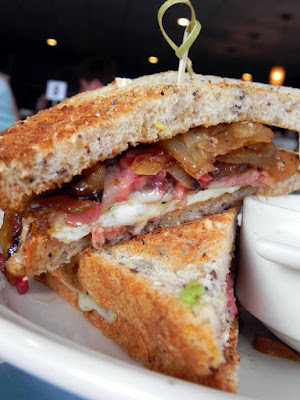 For entrees, John ordered the Cochon de Lait Biscuit and I got the Broken Yolk Sandwich. John's slow-cooked pork with grilled tomatoes and red-eye gravy certainly looked "to die for," but the flavor was somewhat blander than he had imagined. On the other hand, my sandwich made with house-corned beef, Swiss cheese, grilled onions and a fried egg on seven grain toast was spot on. My only complaint was a devout wish for more corned beef because it was, put quite simply, off the friggin hook.

All in all, I chalked any oddities up to being a newly opened restaurant that was still working out the kinks, but the beautiful biscuits and my Broken Yolk Sandwich are more than enough reason to seek a return trip.