A slice of Slice 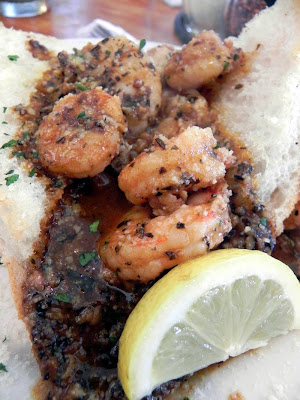 Several years ago when I worked downtown, my co-workers and I used to go out for lunch quite often. They certainly were not the most extravagant lunches, but they were almost always tasty and cheap to boot. There are quite a few spots I don't get to hit up as often anymore and it just so happens that Slice is one of them.  So, when I visited the new-ish Uptown location on Magazine Street not too long ago with Dani and her 3-year-old daughter Posie, I couldn't help but order the exact same thing I always did...with a few additions, of course.

Once Posie settled down with a chocolate soda, we were able to focus on the menu and order. We started with their BBQ Shrimp served on a split loaf of French bread. Although it wasn't quite how I remembered it, there were lots of shrimp and the warm, chewy bread was a perfect sop for the tangy, buttery, garlicky sauce.

For our entrees, Dani and I both ordered a slice of pizza with a half salad, one of the best lunch deals ever for under $10. We both opted for a slice of the Four Cheese Margherita pie with fresh and aged Mozzarella, Provolone, Parmesan, diced tomatoes and basil, but Dani got a Caprese Salad while I chose my old Spinach fallback. The pizza was quite good with a crispy, thin crust and perfectly melted cheese...hot out of the oven. Dani liked the flavor of the Caprese with thick slices of fresh mozzarella and tomato stacked and drizzled in extra virgin olive oil and balsamic vinegar (it was her first ever!), but the tomato was sadly mealy. 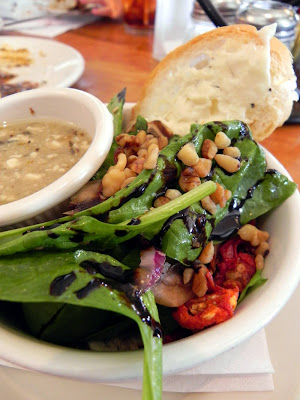 I got a Spinach Salad that they serve with crumbled walnuts, sun-dried tomatoes and smoked bacon with a bleu cheese vinaigrette dressing. Now I realize the vinaigrette looks kind of gross, but it tastes kind of awesome. Trust me on this one. Plus, the salad is also served with a brie-smeared crostini.

Now I'm quite hungry, because I have not yet eaten lunch, and I'm having difficulty concentrating on writing...(stomach rumbles)...see you Monday!