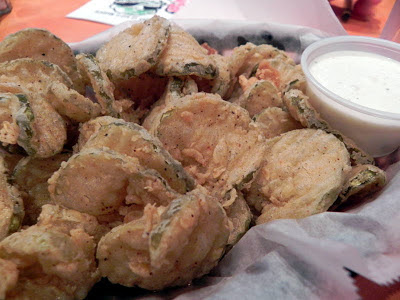 I don't know how it is where you live, but New Orleans is going through a burger explosion. Like freaking KA BOOM already with little bits of lettuce fluttering down to the pavement that you can just make out through the grill smoke.  I still have yet to try Smashburger that opened near the Bulldog or Charcoal's Gourmet Burger Bar, the building that now dominates the corner of Jackson and Magazine, visually competing with the colorful flag party across the street. Cowbell, Truburger and Company Burger all burst onto the scene a few years ago, creating some kind of a fever and now three Five Guys franchises are planning on parking in the Greater New Orleans Area including one rather near to me on Carrollton Avenue in Mid City, not far from another recent opening...Juicy Lucy's. 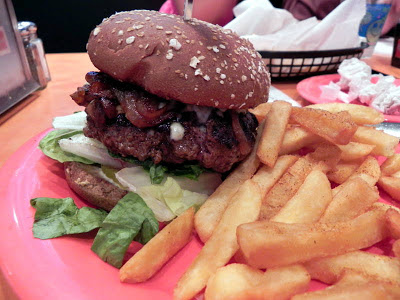 And what about all the burger joints that have been here for a spell. Port of Call...people still line up outside this place on Esplanade and wait for that burger. Let us not forget the holiest of the holy, Bud's Broiler that started on that strange City Park Avenue triangle street in 1952 or Lee's Burgers that started in the early 20th century, closed for a while only to be recently reborn. Oh! Don't even get me started on the number of diners and bars that serve a mean burger in this town; Beachcorner, Clover Grill, Camellia Grill, GBs, and Yo Mama's fall off my tongue without even trying hard. The restaurants that don't focus on burgers, but serve good burgers would only try your patience with my narrative even further and I'm afraid I've already jumped the shark. 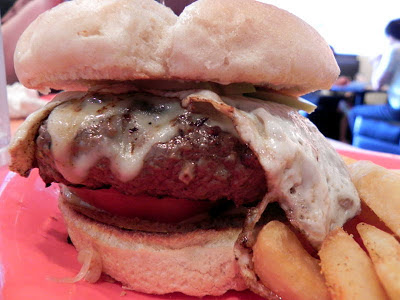 Needless to say...because I have made it so patently obvious, that there are a TON of burgers to choose from these days and everyone has their own peculiarities when it comes to what they like on, in, with or around their perfect burger. What I am trying to say, and having a lot of difficulty, is that when I finally ventured into Phil's Grill a few weeks ago with John, Dani and Posie, I had quite a few expectations.

First off, the menu layout is highly confusing. We got the gist after much pondering, but it still caused confusion for the server considering there were missing burger toppings, perhaps a more vertical list as opposed to horizontal? Just a suggestion... 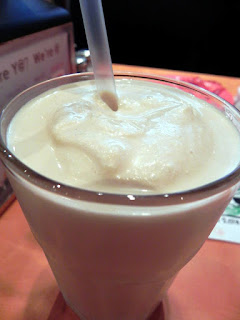 We got an order of fried pickles to share that was served with Ranch dressing. Seeing as we were all hungry and big fans of pickles crisply fried, we gobbled them up just in time for our burgers to arrive. John and Dani both opted for "Philet" meat with assorted toppings like Swiss and cheddar cheese, bacon, avocados and sauces like "Tiger Sauce" or "Avocado Ranch." John even switched out a regular white bun for whole wheat. I opted for the bison meat because I had heard how delicious it was and chose Swiss, avocado, fried egg and bacon and a white bun. Posie opted for a grilled cheese sandwich when she wasn't throwing crayons or a hissy fit. We also shared two orders of French fries.

All of the burgers were juicy, thick, hand-formed and quite tasty. I actually preferred the rich, meaty flavor of my bison patty over John's "Philet." Everyone seemed pretty pleased with their burgers overall. We also ordered a couple of milkshakes, I got Peanut Butter and Dani chose Chocolate. I suppose the biggest shock came when I got the bill which totaled almost $80! I realized that my burger alone was almost $17!

Now, don't get me wrong, I appreciate the "gourmet" aspect of serving ground filet and bison meat, and I did enjoy my burger, but that price is not one I'd pay again. Next time I go to Phil's, I'll probably just stick with Angus, though before any toppings, even cheese, it still comes in at a whopping $9.69. There's just too many other burger joints to choose from...

Thanks - I was thinking of trying their burgers but that's a lot of dough!

Thats not a bad price!

You get what you pay for! Phils is delicious and great quality

We went to Charcoals and spent $38 on two burgers and 1 fry and it was delicious! So worth it!

Smashburger No Bueno To salty

Truburger is YUMMY As well!! Still we spent $25 on 2 burgers and 1 fry

How do you find their menu confusing? All you do is circle what you want on your burger. I don't know how it can get any more simple. As for the prices compared to other place such as company burger and Charcoal's they are cheap. One of the burgers at Charcoals' cost $20!

The menu is confusing because there are way too many options, listed piggly wiggly like, in no coherent order. Also, I wasn't the only one confused, it was everyone at my table and the two tables next to me. PLUS! The servers were even confused because after reading our orders back to us, they skipped over several of the ingredients we requested and STILL forgot after we corrected them!