House of the week: Creole cottage on Dauphine Street 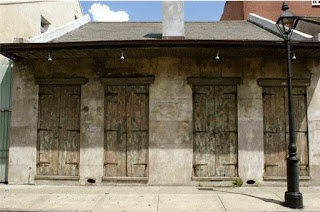 Living in the French Quarter was a dream I had when I first headed down to New Orleans. The historic aspect of this town was a huge attraction to me after all and the Vieux Carre IS history. You won't find an older neighborhood anywhere else in the United States. There are a ton of homes with iron-wrought wrapped balconies and gorgeous gingerbread-like trim, but there are also a few places that look like they just might collapse in the next big tropical storm.

I'm about to show you how deceiving those tumble-down facades actually are...

For example, check out this particular abode on Dauphine Street. It's an ancient-looking Creole cottage that was built way back in 1911. The shutters are old with rusty iron hinges, keeping the interior hidden from the general public walking by. The plaster looks worn, beaten by a century of adverse weather, disrespectful tourists and even a civil war. Now take a look inside. You tell me, is this house worth $675,000? It's like Mama always said, "You can never judge a book by its cover!"
Written by Unknown
Email ThisBlogThis!Share to TwitterShare to FacebookShare to Pinterest

I think this might be Lenny Kravitz's place. It does have a "rock n roll" vibe.

You are correct, Ms. Robinson! Word is that Lenny tore out all the interior walls and made it one giant room,but I have never confirmed that. I see that they got rid of the purple spotlights in front of the house...:)

Good one Kim! Thx :)) I really look forward to your posts! Merry Christmas to you and give NOLA a big kiss for me!

Yes! I was gunna say, for sure Lenny's place. I was taking pics of the old locks and hinges when a passer by told me the same thing!

This is bizzar. I purchesed an original water color of this house and when I was in NOLA last February, not knowing the location, found it and was compelled to have a picture taken in fron of it! Great looking place!!