Brown Improv: A hilarious excuse to visit the burbs... 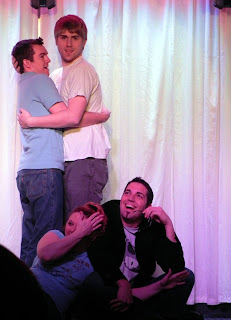 After living the first 32 years of my life in the suburbs of San Francisco, the last thing I've wanted to do since moving here is to hang out in the burbs of New Orleans. So, when my friend Anne invited me to see Brown at City Bar in Metairie last Saturday night, I grumbled a bit and sighed a lot, but in the end gave in (who can resist a girls night out?).

Located on the fringes of "Fat City," I was actually surprised to see City Bar so very full on a Saturday night at eight o'clock, a too-early hour for the usual denizens who I've heard don't start appearing till well after ten. By the time the show began, it was a packed house with standing room only.

Apparently, Brown has been in existence since the mid-90's with basically the same cast of comedic genius working tirelessly to "raise the bar for nightlife in Metairie." I do believe they've succeeded... 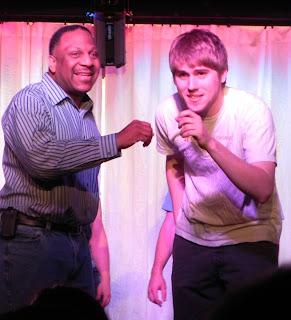 Members Ken LaFrance, Kelli Rosher, Jonathan Kai, Gant Laborde and Bob Murrell get up on stage on Saturday nights and with prompts from the audience, create a completely original (not to mention hilarious) show every week. Comedic skits like Vacation Slides and the "ABC" game are designed to encourage on-the-spot creativity by the actors while incorporating interaction with the audience. On rare occasions the attempts fall flat, but most of the time everyone is laughing uproariously, clutching their sides and wiping tears from their eyes.

If you want to spend two glorious hours laughing your ass off on a Saturday night, I advise you take that trip to the suburbs. For only $10 at the door (2-for-1 if you score a Groupon!), you will spend an evening enjoying raw talent and non-stop laughs. Their next show this Saturday, February 19th at 8:30 p.m. will be their last till the Mardi Gras madness has subsided.
Written by Unknown
Email ThisBlogThis!Share to TwitterShare to FacebookShare to Pinterest