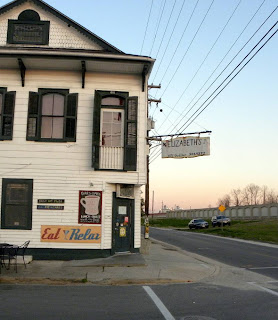 For several years now, both friends and coworkers have been regaling the divine feasts to be had at Elizabeth’s Restaurant in the Bywater.  I can’t tell you how many times it has been a planned destination, but some strange fate, event, catastrophe or other zaniness has prevented me from actually going.  Last night, for my 27th cheat, John and I finally made it to Elizabeth’s.  I have now lost a total of 52 pounds.

Although most folks highly recommended Elizabeth’s for brunch, I decided to try their dinner menu instead.  Let me just say, I will definitely be back to try brunch.  Elizabeth’s tag line is “Real food done real good,” and I can’t argue with reason.

Arriving just at dusk with the sun setting behind the levee, John and I strolled into the quaint neighborhood restaurant right when they opened for dinner.  Located on the corner of Gallier and Chartres Streets, Elizabeth’s is an unassuming, comfortable establishment frequented by locals who probably live just around the corner.  Although we were the first diners on the scene, many patrons filed in immediately after us, quickly filling the large dining room. 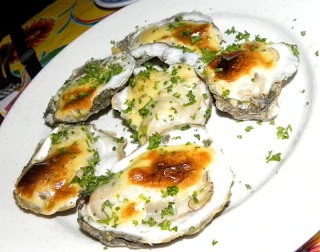 We started out with some drinks and ordered an appetizer from the “specials” menu that seemed almost as expansive as the regular menu.  Although we were a little overwhelmed by all the choices, we decided to try their Baked Oysters.  Now, I know this may be sacrilege for a food writer to utter these words, but I am not a huge fan of foie gras.  To me, it mostly tastes like pure fat.  But I held my tongue and when the oyster dish came out, I did my best to give it an unbiased taste and found myself pleasantly surprised.  The oysters were baked with a “Truffle Foie Gras Mayo,” and I must say I enjoyed it!  Perhaps foie gras isn’t so awful when combined with mayonnaise and truffle oil?  Regardless, it was delicious and cooked only enough to heat the dish through, no rubbery oysters here! 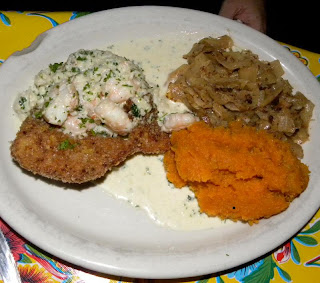 After easily demolishing the appetizer, our entrees came out from the kitchen.  I ordered the Panned Pork Loin with shrimp and crab cream sauce and John got the Panned Rabbit Hind Quarter with Black Peppercorn Brandy Sauce.  Both proved to be huge portions that we were unable to finish, but it wasn’t from a lack of effort!  The pork loin was tender and juicy and the batter had a nice, spicy crunch.  With every entrée, you get two sides and I elected to have bacon braised cabbage plus their sweet potato casserole, both of which were delicious and very filling.

John’s rabbit was equally tasty and juicy, and it also proved to be quite a bit of meat!  I had never tasted the “hind-quarter” before and I really enjoyed the “white meat” flavor and dense texture along with their incredible batter.  John selected the red beans & rice and mashed potatoes for his sides (of course!), and I found the beans to be delectable, spicy and most definitely homemade. 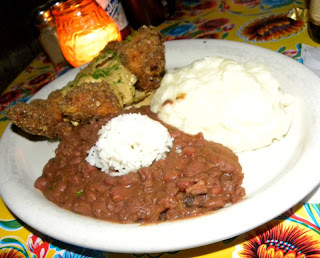 Our leftovers filled an entire to-go box, but I still needed to try dessert!  I chose the New Orleans Pecan Pie, and am pleased to say it has to be one of the best pecan pies I have ever eaten… and that’s including my own!  Topped with freshly whipped cream, John and I fought over the final bites left on the plate.  Stuffed to the gills, John and I waddled out of yet another wonderful New Orleans restaurant.  I was so glad I had the chance, at last, to visit Elizabeth’s after so many excellent recommendations and I was equally pleased that it lived up to its reputation.  Now I simply can’t wait to go there for brunch!
Written by Unknown
Email ThisBlogThis!Share to TwitterShare to FacebookShare to Pinterest