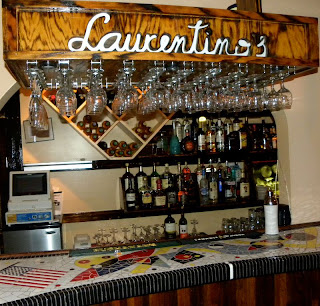 Being obsessed with food, I tend to notice when new restaurants open up in my neighborhood.  Just the other day, for example, I was cruising down Dublin Street in the Riverbend and noticed a bright new sign exclaiming “Barcelona Tapas Now Open.” Ecstatic that a tapas restaurant had opened up right near me, I slowed my car to a crawl. Several of the drivers behind me were dismayed, but I had figured out my next cheat meal. Last night, I visited the Barcelona Tapas Café for my 25th cheat. I have lost a total of 51 pounds.

Curious about its origins, I called the restaurant (504-861-9696) to request a menu and ask a few questions.  Xavier, the owner, happened to answer the phone and filled me in on some facts.  Apparently, Xavier had formerly owned Laurentino’s Restaurant that was tucked away in a strip mall on the corner of Transcontinental and West Esplanade Avenue in Metairie.  Very recently, the building housing Laurentino’s was sold, and the new buyer intends to demolish the strip and erect a car wash in its place! 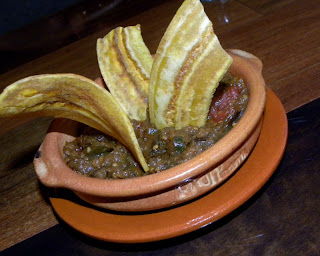 As you can imagine, this came as quite a shock to Xavier, who had been enjoying regular clientele since his opening in 2002.  He relayed to me that many of Laurentino’s patrons had actually made the trek all the way from Uptown specifically to enjoy his cuisine.  I’m assuming Spanish food, particularly tapas, was highly unique to the GNO at the time.

So it seemed that fate had lent a hand, forcing Xavier to move his restaurant to this Uptown locale, delighting his regular visitors and new customers alike.

Since Barcelona Tapas Café opened only a mere two weeks ago, I went into the restaurant expecting there to be little quirks that had not yet been ironed out.  Surprisingly, the only setback I discovered was that they can only take cash right now, and the ATM installed in their restaurant was not yet operable.  After a short ride to the bank, John and I came back to Dublin Street, cash in hand and ready to enjoy some delicious tapas. 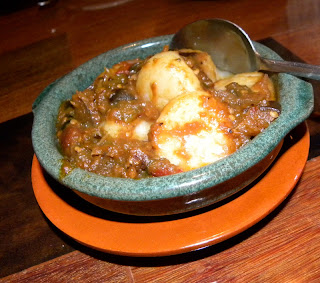 Our server graciously explained the ordering process; we were used to it, though, since it was identical to that of a sushi restaurant.  After reading the descriptions from the menu, John and I checked off the dishes we wanted on a little piece of paper listing all the menu items.  We got a little carried away at first (like that’s unusual), but we finally narrowed our choices to eight different items. Then came the best part: We leaned back in our chairs to enjoy a cool glass of red wine sangria accented with diced apples.

Before long, the small plates started pouring from the kitchen at a rate John and I just barely managed to match. We quickly demolished a plate of thinly sliced Chorizo and Gouda cheese served on crunchy French bread toast points before our server brought another dish of chilled ceviche.  I oohed and ahhed over the ceviche, which featured large pieces of shrimp and fish marinated in citrus juices (possibly both lemon and lime), finely chopped tomatoes and jalapeño peppers.   It was so fresh and spicy!  I can’t wait to go back and eat it again when the weather heats up. 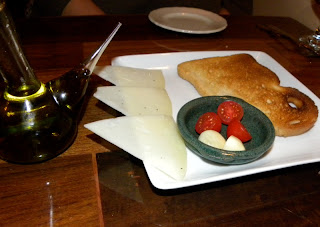 After the cold tapas, our server brought out our hot orders, starting with what they called a Pork Tenderloin & Gouda Cheese Canoe.  The “canoe” turned out to be a slice of toasted French bread topped with a large slice of pork with Gouda cheese melted on top.  It was the tastiest version of a boat I’d ever eaten, and I almost didn’t share it with John.  Luckily, we also had ordered another delicious “canoe”, this one featuring garlic sautéed shrimp drizzled with aioli and layered with melted Brie.  The most incredible thing about these “canoes’ aside from their incredible flavor was that each dish was only $2.99! 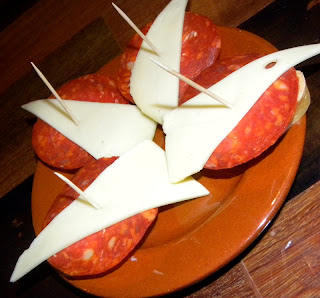 Although all the plates were delightful, I have to say my favorite were the stuffed piquillo peppers that came out next.   These little red peppers were roasted to release a spicy-sweet flavor, stuffed with salmon pâté and covered in a creamy red sauce that I’m guessing was also made from the peppers.  Absolutely wonderful!  I would return for the stuffed peppers alone.

We had two more hot plates to enjoy, an eggplant casserole (or samfaina) and a scallop casserole.  Samfaina is a Spanish dish similar to ratatouille, prepared with onions, garlic, eggplant, peppers, tomatoes and zucchini.  It was very rich, flavorful and rather hearty considering it lacked any meat.  The scallop casserole was very nice with perfectly cooked scallops mixed with a sherry-accented samafaina.

Finally, our server brought us the garlic tomato bread with Danish Cream Havarti and instructed us how to assemble our plate. It just looked like toasted bread with bits of raw garlic, halved cherry tomatoes, several slices of cheese and an elegant little glass carafe filled with olive oil.

Noting the server’s instruction, I gleefully set to work rubbing the raw garlic clove on the toasted bread followed by the tomatoes down to the skin.  Then I drizzled the bread with olive oil and topped it with the fragrant Havarti.  The experience was a lot of fun and scrumptious, too!

We rounded out our dinner with a small dessert, the Catalan Crème Brule that was the same as a regular Crème Brule, only accented with citrus and cinnamon.  Like everything else that evening, it was simply delectable.

We left the new restaurant thoroughly pleased, yet anxious to return to try the many dishes we were forced to skip over.  It seems to me that the dining choices in the Riverbend just keep getting better, and I couldn’t be happier having an awesome tapas restaurant so very close to home.  Y’all should definitely visit the Barcelona Tapas Café, especially if you loved Laurentino’s. Xavier would be so excited to see you again!
Written by Unknown
Email ThisBlogThis!Share to TwitterShare to FacebookShare to Pinterest