The answer at Herbsaint 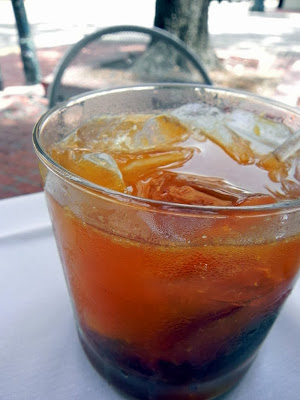 A little over a month ago, I celebrated my birthday again at Herbsaint. As dorky as it may sound, I was looking forward to my 42nd because for a whole year, I would be the "Answer to The Ultimate Question of Life, the Universe, and Everything." You see, I had this little pipe dream wherein during this auspicious year, I would find the answer. Perhaps not the answer to everyone's "Life, Universe and Everything"...but maybe, at least mine? A positive self-fulfilling prophecy? We'll shall see...

To be perfectly honest, I've been feeling a little lost lately, like I've been settling into yet another predictable pattern and I need something to shake it up, something to shake me up. But very recently, over the past month, I feel like I am glimpsing bits of possible futures, paths to embark upon if only I'll just take that next step forward and I was reminded of one of those possibilities during my birthday lunch at Herbsaint.

Instead of our usual table near the bar, John and I chose to sit outside. We ordered a couple of drinks and tried to narrow down our choices to a reasonably-sized lunch, but we still ended up with our own appetizer. John chose the Louisiana shrimp and fish ceviche with cucumbers, fresh tomatoes and crunchy pepitas (pumpkin seeds). It was served in a clay-colored ceramic dish and the morsels were tart, light and far too easy to scoop into your mouth. I picked something equally wonderful (like that's difficult at Herbsaint), smoked salmon with crisp green beans in a creamy sauce gribiche. 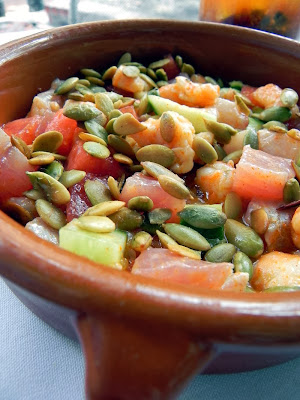 For his entree, John really wanted the grilled tuna sandwich on olive bread and he sighed audibly when our server said they were all out. He settled for the cold roast beef on foccacia with horseradish aioli. The roast beef was rare and his sandwich was scrumptious, but I could tell he was still yearning for the grilled tuna. I ordered the crispy goat with curried lentils, cucumber and tomatoes. I was expecting an Indian-flavored dish but from the first bite, I felt like I was tasting home. It was like the chef had raided my childhood memories of Persian and Turkish food and combined it into this dish. Instead of having each ingredient separate like they do with Persian kebab (rice, grilled meat, onion & cucumber yogurt salad), everything was mixed together in perfect proportions.

The reason this dish touched my soul was two-fold. Not only did it remind me of home, but it triggered in me an increased desire to tell my story ... a story I've been tossing about in my brain for sometime. A story about growing up with an odd mix of Southern values, Persian mysteries and American ideologies, and how food played such a major role throughout...in good and not-so-good ways. I think it would be highly therapeutic, if nothing else, and I finally feel ready to try. Letting the flavors of my youth roll over my tongue at Herbsaint felt like a beginning....and an end. 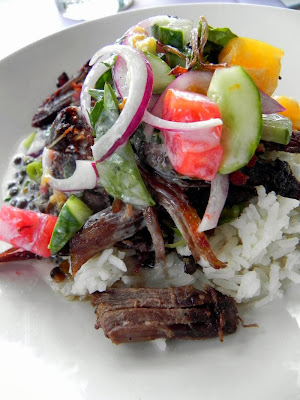 Well, there was certainly an end to our lunch, and a typically divine one at that. A sudden thunderstorm broke and we endured a few sprinkles while devouring dessert (thank you Rhonda!), a Duck Egg Crème Brulee with Pecan Lace cookies. The sugar crust was perfect, a hard tap of my spoon breaking through to a thick, smooth custard. We enjoyed dipping the crunchy pecan cookies into cups of freshly brewed French Truck coffee while watching the streetcars rumble by.

I realize that neither Douglas Adams nor lunch at Herbsaint Restaurant necessarily hold the secrets of life, but they both make my life feel more fabulous and there ain't nothing wrong with that.